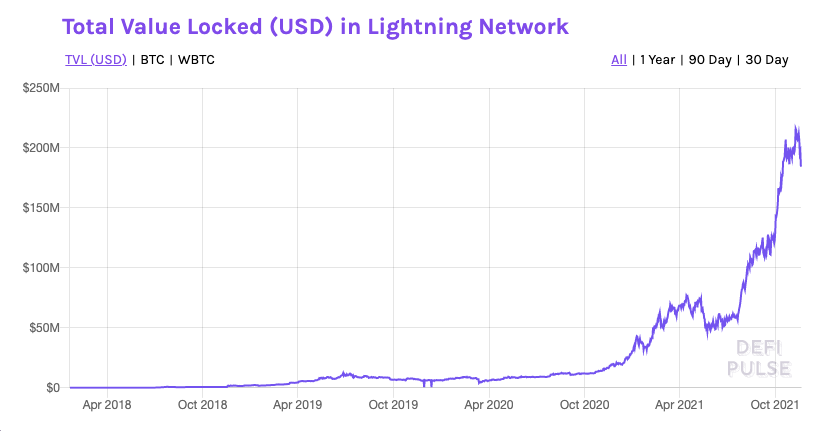 Welcome to the last metric that Bitcoin investors should be tracking. The metric we will discuss in todays newsletter is “BTC Locked in Lightning Network”.

If you missed the other six, here are the links to read them:

In an earlier article we spoke about Bitcoin vs payment networks like Visa. Many speculators make the mistake of comparing Bitcoin to Visa or PayPal. The problem with making this comparison is that they’re not the same thing. Bitcoin is a settlement layer. This means that the Bitcoin network finalizes transactions without needing other intermediaries. In contrast, Visa and PayPal still need merchant banks and other parts of the legacy banking system. A perfect depiction of this is how PayPal and Visa are starting to incorporate crypto into their business models. In order to do this, these payment networks need the Bitcoin network as the settlement layer for BTC.

Example: Person buys BTC on PayPal -> PayPal must purchase the Bitcoin from the Bitcoin network -> Bitcoin protocol settles the transaction

Basically, using Lightning Network a bulk of Bitcoin transactions can be recorded on an off-chain ledger outside of the main Bitcoin blockchain. Once that ledger is ready to close it brings those transactions onto the main chain, nodes record them in the ledger, and each Bitcoin address is updated. This allows for a lot more smaller transactions to be processed faster, creating better scalability. The main network can remain less crowded and settle large transactions while settling smaller ones in batches.

This is an important metric because similar to tracking BTC locked in Ethereum, BTC locked in Lightning Network gives us an idea of the potential for Bitcoin being a payment network for the masses.

The concept of Lightning Network is genius, however growth has been modest compared to other DeFi layers in other chains.

On one hand the total value locked in Lightning Network is very modest with about $180 million to date. If we compare that to BTC locked on Ethereum which was $13.46 billion, Ethereum is miles ahead of Lightning Network. Currently, it’s not even in the same universe as Visa which does 150 million transactions per day and about 1700 per second on average.

However, on the other hand, Lightning Network is only three years old and has seen steady growth! We cannot expect it to compete with multiple decade old legacy systems this quickly. Something this big takes time to develop and on-board new users, while maintaining Bitcoin’s core characteristics.

It will be interesting to see how Ethereum and Lightning Network grow when it comes to using Bitcoin. Nonetheless, the industry is growing as a whole. WAGMI.