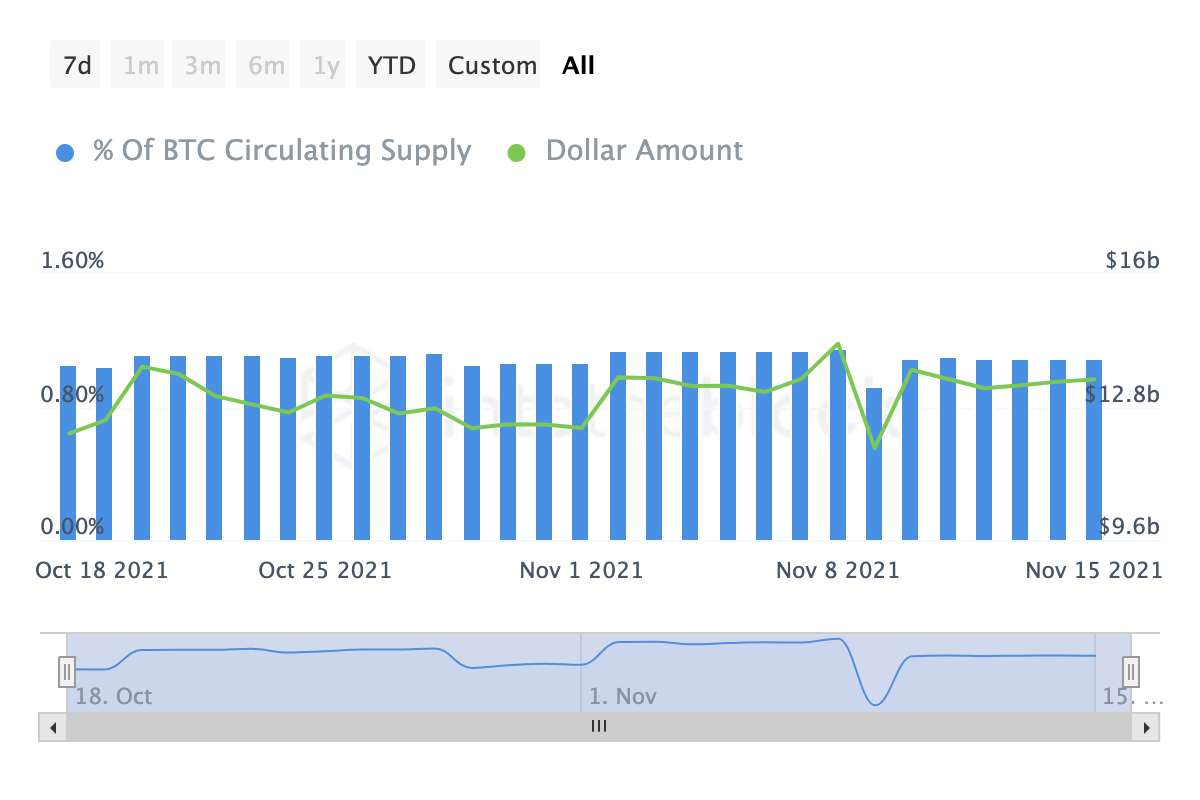 Welcome to the fourth metric that Bitcoin investors should be tracking. The metric we will discuss in todays article is “BTC Locked on Ethereum”.

If you missed the third metric, you can read it here.

Let’s begin by going into what being locked on Ethereum means. If you haven’t heard, Ethereum is the second largest cryptocurrency. It uses a more complex coding language than Bitcoin which allows developers to build all sorts of different applications on top of it. Ethereum is similar to the internets HTTP and an app built on Ethereum is like Facebook or Twitter. The difference with Ethereum is it empowers the decentralized economy and many believe it will be one of the core building blocks to Web 3.0.

In the Ethereum world an app is called a DApp, for decentralized application. There are developers all over the world building new DApps onto Ethereum that allow users to earn yield, become a liquidity provider, take out a loan with collateral, build collectible NFT’s, trade derivatives, and much more all without any intermediaries. The rabbit hole of Ethereum is quite extensive and exciting.

So, why would a user lock Bitcoin onto Ethereum and why does it matter?

Since Ethereum has a growing ecosystem of Decentralized Finance (DeFi), Bitcoin holders that want to capitalize on the opportunities within the ecosystem can use their Bitcoin to do that.

For example, there is a token that is built on Ethereum called WBTC which is short for Wrapped Bitcoin. It is valued as 1:1 with Bitcoin, so 1 WBTC = 1 BTC. Perhaps someone wants to use their Bitcoin as collateral to acquire another cryptocurrency on Ethereum but they don’t want to sell their Bitcoin. They need this other coin for whatever reason. Maybe they want to speculate on the price or use it to earn yield in a certain smart contract. They can swap their BTC for WBTC, use that WBTC on Ethereum as collateral and then swap it back when they’re done. It sounds complex but it really isn’t once you begin to research or use it.

You can swap BTC for WBTC by going through one of the WBTC merchants which include: Dharma, Kyber, Set Protocol, GOPAX, AirSwap, Prycto, Ren, and ETHfinex. Also, you can use a decentralized exchange like Uniswap.

As an investor we look at BTC locked on Ethereum because it gives us an idea on different ways Bitcoin is being used in addition to being a store of value. The more productive use cases Bitcoin has, the more value it derives. Bitcoin is developing its own solution for DeFi called the Lightning Network but more on that in another article.

There is currently about $13.46 billion of Bitcoin locked into DeFi. That means about 1.1% of the current Bitcoin supply is locked on Ethereum and other DeFi protocols. That’s over 207,000 Bitcoin.

Clearly Bitcoin is developing new use cases. Bitcoin helps the Ethereum network with liquidity because it is the most valuable asset in crypto. The Ethereum market alone is still quite small so allowing users to bring Bitcoin on the network helps with growing and developing the DeFi ecosystem.