Ethereum has finally woken up the past couple weeks. After having a strong start to 2018, it is had a huge decline the past couple months. It hit all-time highs on January 13th of $1424 per coin. Since then it has been a non-stop downtrend, hitting lows in the 350’s on April 1st. That’s more than a 80% decline in around 2-½ months.

At the start of the year, Ethereum was showing some incredible relative strength to Bitcoin and other altcoins. At the end of January, Bitcoin was about 50% off its all-time highs, hanging out in the $9000-$12,000 range. Meanwhile, Ethereum was consolidating in the $900-$1200 range, right near its all-time highs. It was demonstrating strong relative strength to other cryptos, indicating that it might start trading independently to Bitcoin’s trend this year. However, it had a huge rejection in the mid-1200’s, after it looked certain to be heading back to all-time highs. You can see the big fake out on the daily chart highlighted here:

Since then, it has been bag holder city for Ethereum longs now that is trading 70%-80% off its highs. This chart provides an interesting perspective on a potential cause behind Ethereum’s massive retracement: 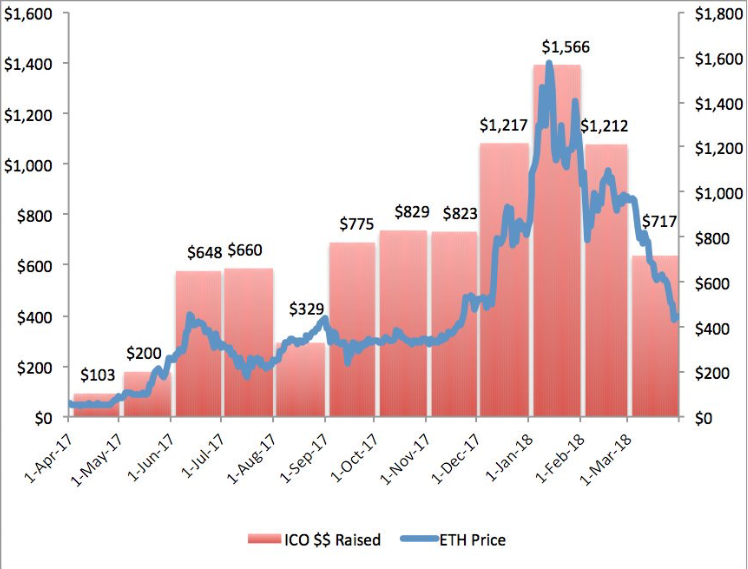 At the peak of the crypto bubble in 2017, a ton of money was pouring into ICO’s, as bullish sentiment reached irrational levels of exuberance around cryptos. As the quantity of ICO money raised decreases the demand for ETH decreases as well since most ICO’s do fundraising through ETH. Decling demand of ETH will likely lead to the value of the cryptocurrency declining as well. The uncertainty surrounding the regulation of cryptocurrencies in 2018 has caused potential investors in ICO’s to be more tentative to put up capital.

In February, Ethereum begins to start following Bitcoin’s trend, similar to the way it did throughout 2017. Ethereum and Bitcoin’s had a huge retracement at the start of February and had a big bounce in the second half of the month, where it looked like they would start grinding back towards highs. The bounce couldn’t follow through, and both ETH and BTC had a fresh round of bag holders. Ethereum than began to show relative weakness compared to Bitcoin throughout the month of February and March. Compare ETH’s daily with BTC’s and notice how much weaker all the bounces ETH had in March was compared to BTC:

We have been shorting ETH a ton in our chatroom the past couple months, but we have also been playing bounces after it starts showing a bottoming pattern. Ethereum made an obvious higher low and higher high on its daily chart, which put it on our radar for a long trade. Here is our entries and exits in a recent trade we took on ETH: 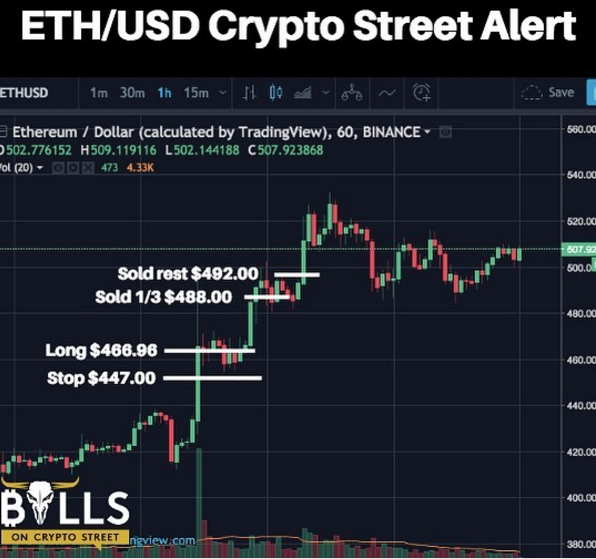 You can see we sold a bit early, but big round psychological numbers will often act as resistance in cryptos, so played it safe and took profits before a key resistance level like the 500 mark. You can see on ETH’s daily how it finally broke out of the downtrend, and once we saw confirmation of its strength, we took a long position on the flag break in the 460’s last week on the 12th. It is still holding its strong uptrend, and is will be on watch for another long entry in the upcoming days and weeks.