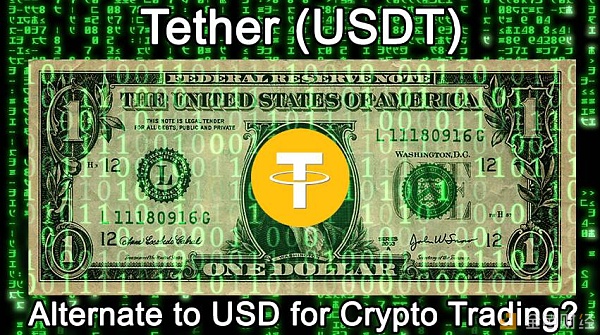 Yesterday Tether, one of the most popular stable coins, had a huge selloff. On some exchanges, it tanked as much as 10-15%, which is a huge move for a stablecoin that is supposed to protect against volatility. Let’s start by defining Tether, then talk about why it crashed, and discuss some stablecoin alternatives to it:

USDT, known as tether, is a cryptocurrency asset derived from the Bitcoin blockchain. Each unit is backed by a US dollar (and other fiat currencies) held in the reserves of the Tether Limited, and can be redeemed through the Tether platform. The fiat currency is kept in a designated bank account. USDT can be used like any other cryptocurrency, and was created to facilitate the transfer of national currencies. Essentially it is meant to provide an easier and more stable solution for converting to fiat currency on cryptocurrency exchanges that do not take fiat. Some exchanges that use USDT include Binance, Bittrex, and Poloniex.

Despite the general crypto markets rising, USDT had a huge dump the last 48 hours. USDT is designed to be a stablecoin. This means it is supposed to have low volatility. Once it broke the $.97 area, it began a huge unwind, seeing as low as $.85 on the Kraken exchange. Bitcoin and many other altcoins have been spiking big as result of the decline in USDT value, as the cryptocurrency USDT is paired and must appreciate in value to account for the selloff. It is like how when the Yen crashes in the USD pairing, the US dollar must appreciate in value.

There have been numerous issues reported with Tether. People appear to be losing faith in the token. Starting off, there has been a lot of sketchy accounting around the asset and major lack of transparency. Crypto-Odin in the Cryptostreet chatroom gave some great commentary on the situation:

“They did not release a legit audit.. they released a letter from a law firm saying they had the funds. It only raised more questions however because law firms do not conduct audits and the letter only stated that the banks could confirm funds were available but they did NOT certify that each Tether was backed on a 1 to 1 ratio – only that sufficient funds were available to cover exchange and funding operations.Basically it was perceived as a very vague, not specific, letter that could be “pointed to” as an audit rather than an actual audit.”

There have also been rumors about Tether having issues with a partner at Bittrex. As well, an offshore bank that is said to be holding the fiat that backs up Tether is closing down, Tether has denied that this bank holds their money. This could all just be FUD but it definitely brings some suspicions to investors.

TUSD serves a similar purpose to USDT. It is meant to be a stablecoin that will provide stability from the volatile swings of other cryptocurrency pairings. However TUSD is 100% backed by US dollars, and unlike USDT, offers holders “full USD collateral, regular attestations, and legal protections against misappropriation of the underlying USD.” Now that people are losing faith in Tether, that money could be rotating into TUSD and other stablecoins, with TUSD being one of the most popular alternatives already.  TUSD has been much more transparent and gives more guarantee that the cryptocurrency is actually backed by the US dollar.