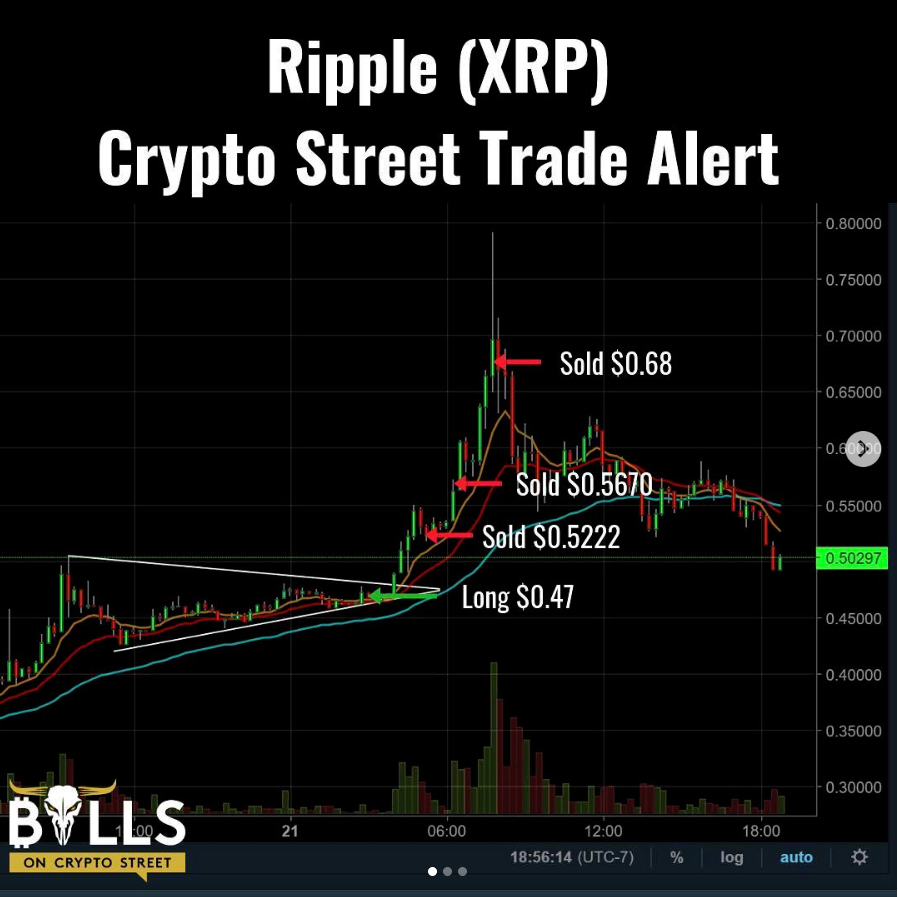 XRP has had a monster shred in the past few days. It ran from $.27 to $.79 in just four days. News came about a few days ago that PNC bank had completed a trial phase of Ripple’s xCurrent, and now plans to fully integrate the proof-of-concept protocol throughout the entire banking system. One of the top-10 largest banks in the US will now be able to execute lightning fast cross border payments. xRapid was also shown in the last few days to save transaction costs by 40-70 percent.

As a result, Ripple had temporarily passed Ethereum in terms of total market capitalization in the past few days. These kind of opportunities are rare in the current crypto market conditions. You must know how to capitalize on these opportunities when they come around, because you don’t know when the next big ripper will come. Here is how we capitalized on XRP’s massive runup: 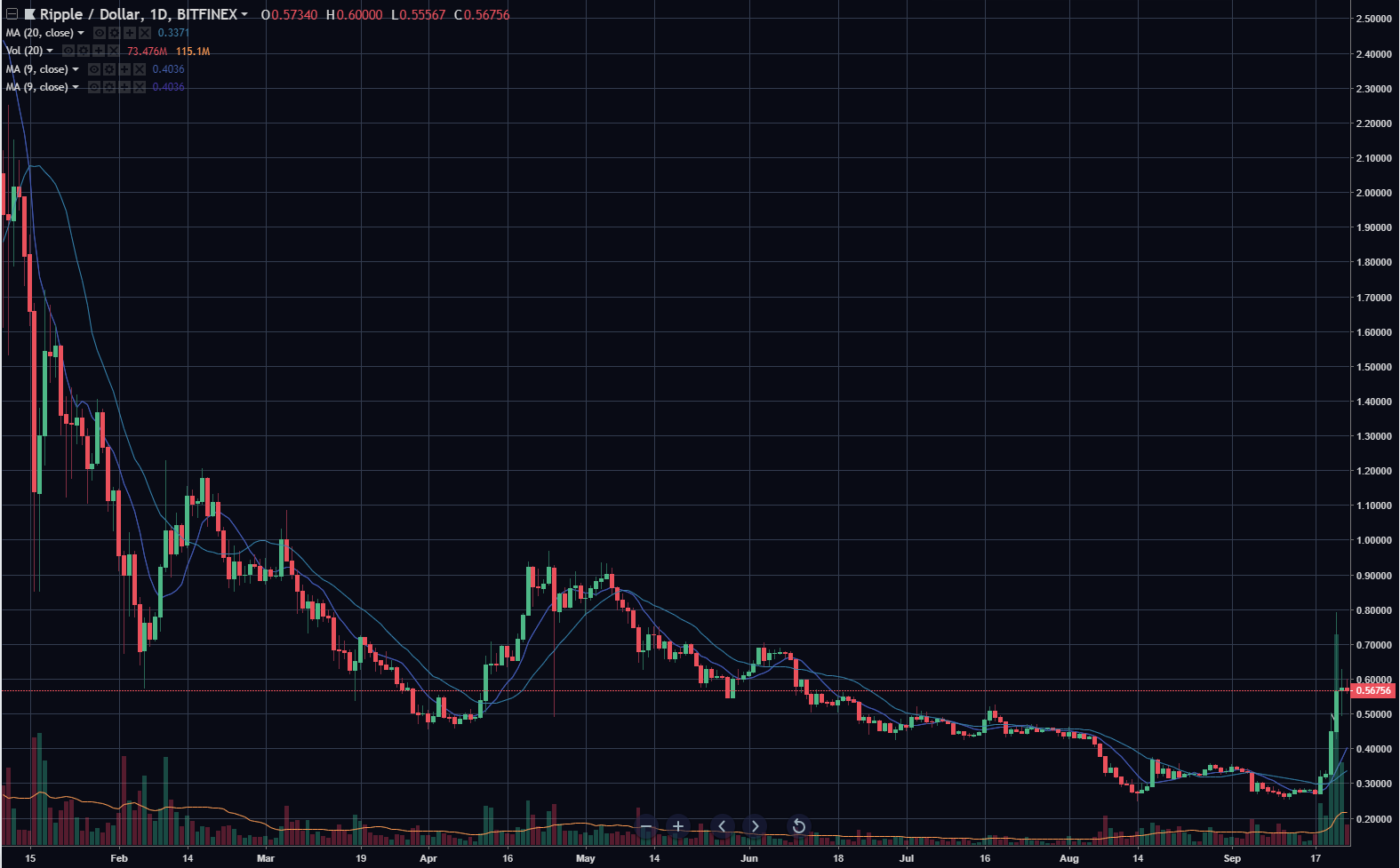 XRP has seen a massive pullback from its run up in late 2017/early 2018. It hit a high of just over $3 a coin, and then recently was trading as low as $.25 last week. We have seen a double bottom pattern at this level in the past month, and is part of the technical reason behind the massive run in XRP the past few days. Once we broke over the nearby $.35 resistance level it never looked back. Once BTC started running earlier in the week, XRP was on my watch-list for a breakout over this resistance level. But I never expected 300% move in just a few days, especially in the current market conditions, where most cryptos have a lot of supply above due to the down-trending market conditions.

Last Thursday I originally took a position in XRP after it broke out and started to flag over the resistance level. I unfortunately sold way too soon, because I did not expect XRP to hold up. Most cryptos in the current market conditions have seen nice pops, but then quickly fade off. I had an almost 10% gain on the trade, and didn’t think it was worth getting greedy. My plan was to reattack if it continued to show strength, and it ended up giving us another setup:

All of these trades are called out live in our Cryptostreet chatroom. I took another position on the break of the second flag on the intraday chart below. You can also see the first flag I took my first position on as well: 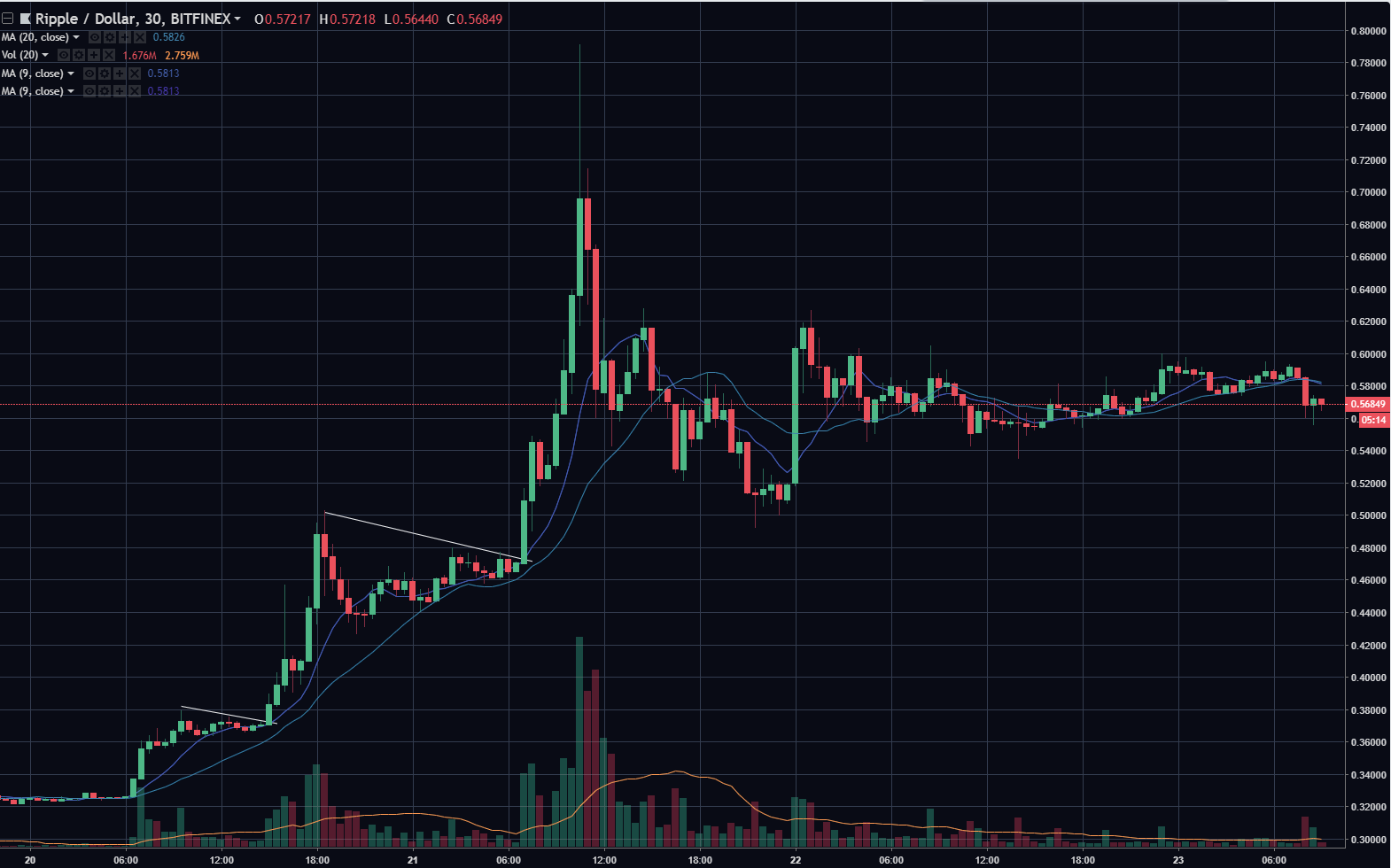 I then scaled out into the strength. This is without doubt one of the best trades I’ve had this year. This trade is a great example of why I like to scale out of my positions, versus selling everything at once. No one knows where the top will be on a move like this. But scaling out of your positions allows you to take some profits, and also keep you in a position for a bigger move. This trade also shows why I like to reenter positions when the crypto is showing the trend is not over. When you sell early and the momentum is still there, you cannot be afraid to reetner. Be sure to wait for a pullback, and not chase based off FOMO. Patience is the most important virtue in successful cryptocurrency trading.