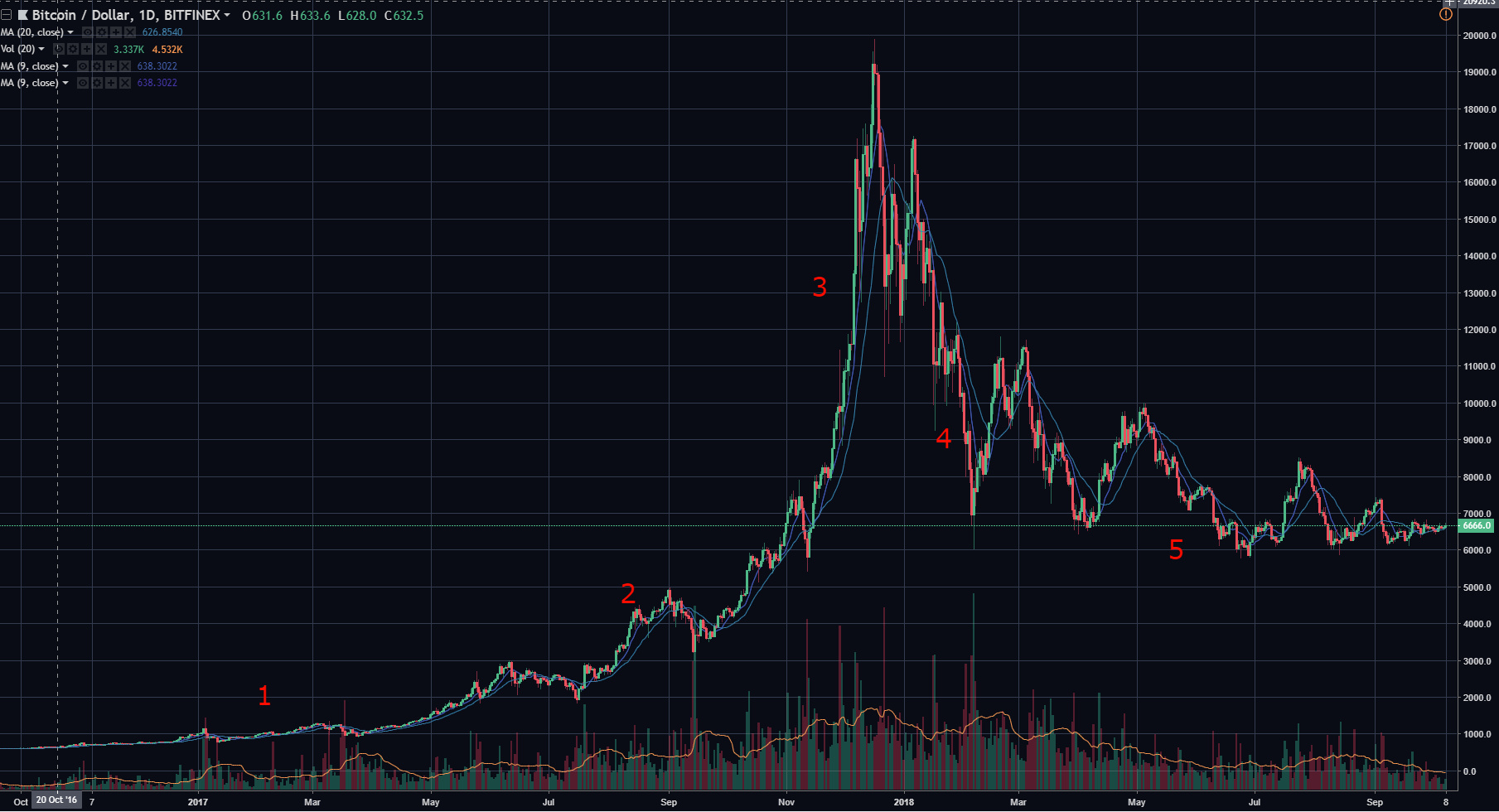 The accumulation phase is characterized by sideways price action, where there is an equilibrium between buyers and sellers. There is not much volume or volatility in the market, and there is not much public spotlight on the market. However there is slow accumulation of buyers, evidenced by the higher lows taking place, as seen in the diagram above in Bitcoin in 2016 and early 2017. There is no major breakout yet, but this is the time where the money starts accumulating their positions.

The run up is a period where we are in a healthy uptrend, characterized by consistent series of higher highs and higher lows. The market is moving upward at a healthy pace, but it is taking time to pullback and consolidate before making its next move up. There is some optimism creeping into the markets. There is some PR on the cryptocurrency, but it is not quite mainstream yet. This is the period from about March 2017-November 2017. Bitcoin was grinding up about 50%-75% at a time, and then trading sideways for a couple weeks, and then would make another push higher.

This is a period characterized by a speed up in price relative to prior price action. You can see how Bitcoin was slowly grinding up from March-November. And then in late November, Bitcoin started to really pick up pace. All of a sudden we went from $8000 a coin to $20,000 in just 3 weeks. This is the time where the smart money is selling. This is also the time where the dumb money is loading the boat, thinking we are heading to the moon. Bitcoin is all over mainstream news outlets, and even your plumber is telling you about blockchain technology and how it will change the world.

This is where things get ugly. The run down period is when we see a dramatic pullback in the markets after it looked like the cryptocurrency would be going to the moon. There is often a major crash the signals that the top is in. We saw this when Bitcoin crashed 50% in late December. After that day, every pop was sold into. All of a sudden, buying with your eyes closed stops working, and panic sets into the markets. Bitcoin and every other major cryptocurrency in January and February this year saw a dramatic pullback, losing 70%-80% of their value. The smart money is able to make a ton of money during this period because there is a ton of volatility and range to make huge gains in a short period of time. There is a ton of money to be made short selling during this period, and also by buying for a quick bounce.

Similar to the accumulation phase, the distribution phase is characterized by sideways, choppy price action. The difference is that this is the phase that immediately precedes the rundown phase. Range starts to contract significantly from the Rundown phase. There is a lot of negative press about the cryptocurrency during this period, and all the bitter bulls who bought at the top of the parabolic move are calling it a scam. Every major pop is sold into. There is too much supply from the rundown phase for cryptos to get any upward momentum. This phase can last from months to years. We have been in this phase ever since March, when it became clear that Bitcoin was not going to head back to all time highs anytime soon.

Bitcoin has had major pullbacks many times in the past 10 years like we have seen earlier this year before, and it has survived and broken out to new highs after several months of consolidation. The key is to know the cycles, recognize where we are, and know that it just takes time for equilibrium to settle in the markets. Once the sellers are worked out of the market and more regulatory certainty comes, we could see Bitcoin start breaking to new highs in the upcoming months and years.