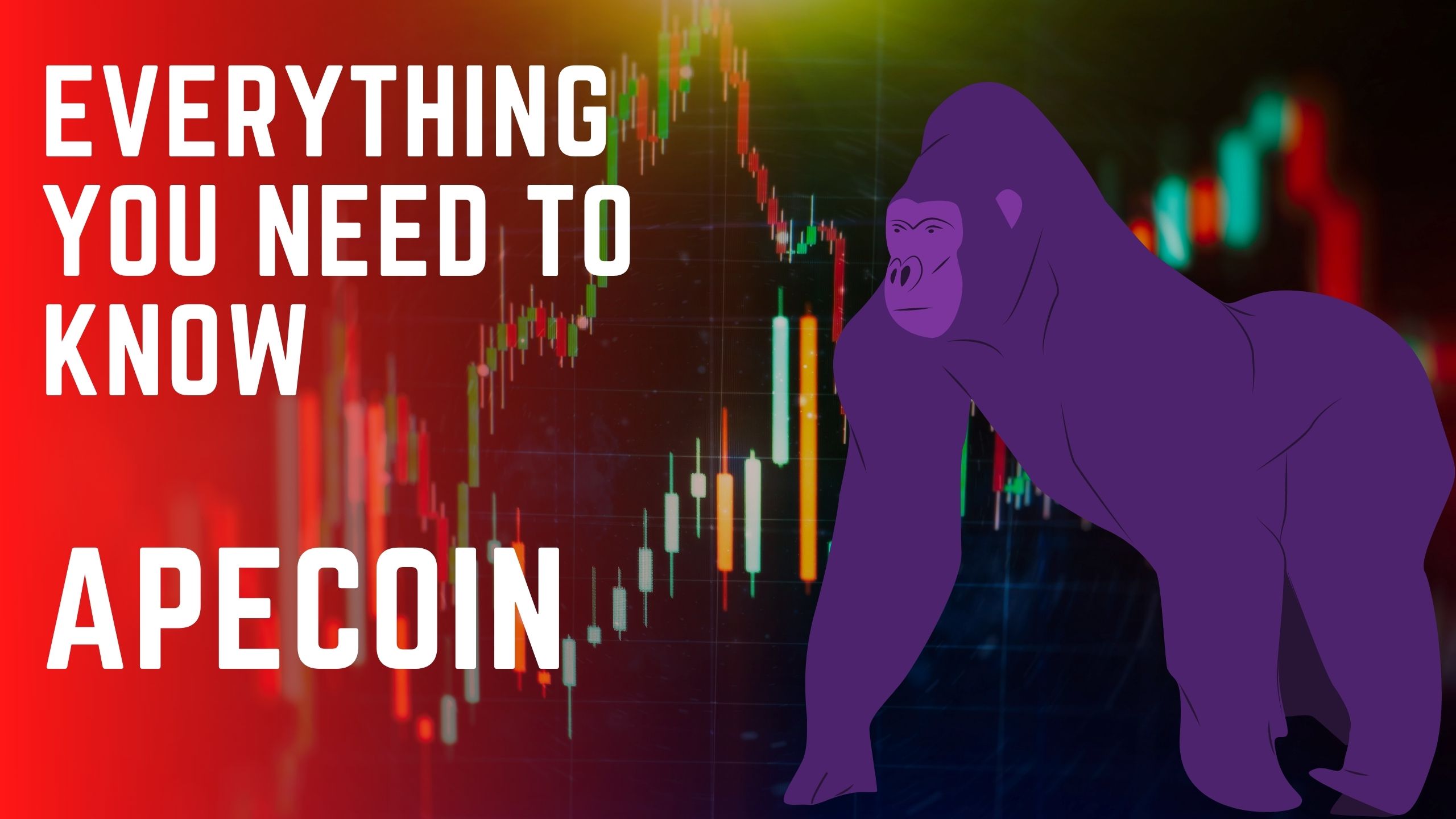 The crypto space has been agog with news surrounding the launch of a crypto that has been linked to the popular NFT project, Bored Ape Yacht Club. ApeCoin has become quite popular not minding that it is a new cryptocurrency.

It is a coin that has been airdropped to holders of BAYC, Mutant Ape Yacht Club, and the Bored Ape Kennel Club NFTs. Though it is fairly new, different brands and companies, both in the crypto space and outside have announced their intention to incorporate the token into their operations.

ApeCoin is a cryptocurrency that is being overseen by ApeCoin DAO with some utility both inside and outside the ecosystem. On 18th March 2022, the coin was launched to the public and the airdrop process started for holders of BAYC and related NFTs.

Those that own the BAYC NFTs that claim the tokens can decide to sell them, trade them on exchanges, or use them in any of its utility inside the Bored Ape ecosystem and outside. It is the utility token of BAYC, the popular NFT project that has the likes of Jimmy Fallon and Eminem as members. The project has evolved to become quite exclusive, attracting A-list celebrities, public figures, and even companies. As the governance token, those that hold it can participate in the decision-making process.

It will control the innovations that the BAYC ecosystem unleashes in the future. Though it may be linked to the BAYC NFT project, it is not controlled by Yuga Labs, the managers of the NFT project, but instead by ApeCoin DAO.

What is ApeCoin DAO?

ApeCoin DAO is the Decentralized Autonomous Organization behind the development and management of the architecture behind ApeCoin. According to the ApeCoin official website, the DAO members “make decisions regarding Ecosystem Fund allocations, governance rules, projects, partnerships, and beyond.” To become a DAO member, the user must hold ApeCoin. During the voting session, members can vote based on their coins.

Though the ApeCoin DAO determines what happens in the ecosystem, the platform is run by the ApeCoin Foundation. Its official website categorizes the Ape Foundation as the steward and not the overseer of the platform. Their job is to ensure that the decisions of the DAO are implemented in the platform.

The Ape Foundation ensures that the DAO remains decentralized and the governance lies in the hands of community members.

As part of its duties, it will run the daily affairs of the DAO, organize the financial aspects and do much more. It can be likened to the engine of the Ape Coin Ecosystem. During the course of their activities, they pursue the goals and decisions set out by the DAO. Expenses are usually made by the Foundation using the funds in the Ecosystem Fund. This is manned by a multi-sig wallet.

The Ape Foundation and DAO have a special council called the Board. The Board is made up of people that ensure the ecosystem is running smoothly. This special council does not make decisions for the DAO, instead, they implement the consensus made by the members. Their role, according to the website, “is to administer DAO proposals and serve the vision of the community.”

He is the co-founder of Reddit and a popular crypto enthusiast.

Wu is the head of Ventures & Gaming at FTX, and a reputable figure in the crypto ecosystem.

Bajwa is a principal at Sound Ventures

Siu is the co-founder & Chairman of Animoca Brands. This is not surprising since Animoca Brands and BAYC are working on a secret project, which will incorporate ApeCoin.

He is the President & General Counsel at Horizen Labs.

The aforementioned will be members of the Board for a period of six months, after which, it elapses and a voting session is held by the community.

How to get the ApeCoin?

The ApeCoin is an Ethereum-based token that is being airdropped to BAYC and related NFT holders.

Holders of BAYC and related NFTs

Those that hold the aforementioned NFTs are eligible to get an allocation of the ApeCoin freely. The claim period starts from March 17th, 2022, and it has a closing date. To claim the free token, the NFT holder should head to the official website of ApeCoin.

Every NFT that belongs to the BAYC family has its range of allocation attached to it.

Those that hold the Original Bored Ape NFT are given 10,094 tokens, Mutant Ape owners are earmarked 2,042 tokens, while those that only hold the Bored Ape Kennel Club NFT are not eligible for any tokens.

Holders of the Bored Ape Kennel Club NFT and any of the two aforementioned NFTs earn bonus tokens. 15% of the 1 billion token supply of ApeCoin was earmarked to NFT holders, while 47% is for the DAO treasury.

The holder can only claim the airdrop once for an NFT. The Bored Ape Kennel Club NFT does not attract any airdrop by itself because it is seen as a companion NFT to the others, hence, it possesses no utility. Holders can only get airdrops, if they pair their BAKC NFTs with BAYC NFTs or MAYC NFTs.

At the moment, ApeCoin is being listed on multiple crypto exchanges, especially those that belong to the first tier. Some exchanges that one can buy this token from are Binance, Coinbase, Gemini, FTX, and Huobi Global.

If you are not a holder of BAYC and related NFTs, you can buy the ApeCoin from exchanges or NFT holders that want to sell their coins.

ApeCoin has multiple use cases both inside the BAYC ecosystem and outside. Below are some of its use cases.

With the launch of ApeCoin, multiple brands both inside and outside the crypto space have announced their interest in incorporating the coin into their architecture or a product that they are building.

Firstly, Animoca Brands, a crypto game maker, stated that it was working on a secret project with Bored Ape Yacht Club, and is intended to incorporate this token into the design. It is expected that the ApeCoin will be the reward in the Benji Bananas game.

Secondly, nWay, a development team has also announced that it will be incorporating the coin into the game that it is developing concerning BAYC.

In the future, it is expected that more brands will integrate ApeCoin into their project. Third parties can become part of the ecosystem by using the token as an incentivization tool.

ApeCoin has a unifying element that offers it’s holders access to a tool to exchange value among themselves. Users can pay for items using the coin, especially when a merchant integrates it into their functionality.

It is not news that the BAYC ecosystem is quite exclusive and open to only those that hold its NFTs. Those that are unable to possess these NFTs are left out and may want a glimpse of the features that are available. Holding the ApeCoin offers people access to exclusive features like merch, events and much more. It is a key to the BAYC universe.

As a DAO, holding the ApeCoin allows people to make decisions in the ApeCoin DAO. They can submit proposals to the community and vote when needed. Let’s say that the annual election is about to be held, community members can vote on the potential Board members. As time elapses, decisions will have to be made concerning the products that the platform offers, as well as development processes, and holding the coin will avail the holder of voting rights.

ApeCoin is an ERC20 token with a maximum supply of 1 billion coins that were minted at once. The distribution formula of the tokens is below.

62% of the token supply was earmarked to the Ecosystem Fund. 150 million was airdropped and 470 million ends up in the DAO treasury.

Out of the tokens earmarked to the ecosystem fund, 150 million Ape Coin was shared to holders of BAYC and related NFTs, which is 30.25% of the circulating supply.

16% of the token supply ends up in this category. 150 million is meant for Yuga Labs, while 10 million of the tokens are earmarked for donation.

14% of the ApeCoin is allocated to the launch contributors. Those that contributed to the development of the project. 140 million tokens are locked up, while 10 million are shared upfront.

8% of the ApeCoin is earmarked to the four founders of BAYC, which is pegged to 80 million tokens.

If you want to learn how to trade the momentum of cryptos like ApeCoin, check out our Cryptostreet Trading Bootcamp.